Today the Mariners swept their wildcard series to move on to the American League Division Series. The last time the Mariners made it to the postseason, I had just started my MFA at a college that would close a few years after I graduated. If I had understood accreditation as well as I do now, that might have been predictable to me; the playoff drought that would follow—twenty seasons without advancing—was less predictable given that the Mariners had tied the single season wins record. And they had the phenomenal rookie Ichiro Suzuki. When I moved to Japan after graduation, I spent my first year in the prefecture he was from. It created an instant path to connection when I met locals and said I was from Seattle.

Baseball gives us time outside of time—games measured in outs and innings instead of a clock. It makes nostalgia easy. I go back to 2001 and the years that followed, moving within Japan and then to New York and Zhengzhou and Belfast and here, to Majuro Atoll. I go back to 1995 when I was an early adopter of dual enrollment through the Running Start model. No one had really thought through the implications of having a fifteen-year old be essentially a full-time college student and I am grateful I was not limited by policies and safeguards that would later be imposed, though from my current perspective, I recognize the need for them. It was another time in my life I didn’t quite belong, and the Mariners provided a key to connection: the whole region believed in Refuse to Lose.

The timelessness of baseball links us to the past and gives us space to dream of the future. But in 2001, I had yet to imagine living and working overseas. In 2022, I am a vice president of a college in the middle of the Pacific. I published my third book (second collection of poetry) this year. The latter fulfills what I was always striving for; the former came about through a series of surprise opportunities.

For so many years, the Mariners came close to the postseason. Even after they reached 99.9% probability of making it, their finally clinching felt like a surprise. They made game 2 of their series against Toronto a surprise, coming back from an 8-1 deficit. Baseball is about winning in unexpected ways. And I am always looking for those unexpected chances in my own life.

What’s next? The season isn’t over.

My poem, Our Assorted Quarantines, about living on an island COVID-19 has not (yet) reached while friends and family around the world have to isolate themselves, was published as part of the Indolent Books’ online poetry project, What Rough Beast. Read the poem at: https://www.indolentbooks.com/what-rough-beast-covid-19-edition-05-26-20-elizabeth-kate-switaj/

You can now read my most recently published poem, Forest for the Trees, at Indianapolis Review. This poem came from my ongoing efforts to think through what it means to write in an age of surveillance and against the tide of state violence.

In this, the final week of the year, Singapore-based Eunoia Review haspublished two of my short stories: Game Night and When the Typhoon Came. But what the stories themselves are based upon back further than 2017, back before I moved to Majuro atoll, before my years in Belfast, before China, to my years in Japan. 2004 to 2006.There are feelings I have from that era of my life that are more immediate than those from any other set of years. And yet that time feels more unreachable and distant than a decade and change can justify. It has felt that way since mere months after I left. Trauma will cleave.

The latest piece to be published from my Articulations series can now be read at sidereal magazine. 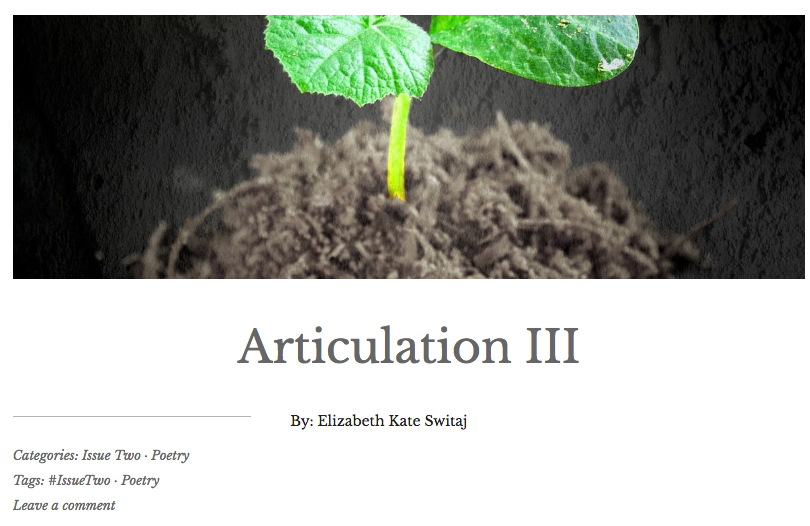