Yesterday, I participated in the creation of a massively co-authored novel. The goal had been to reach 50,000 words; we reached 41,184. With this kind of event, however, it is the process and not the product that counts, and so I want to explore that process and what I learned it from it here.

So a duck walks into a bar and a square and a Starducks and a dystopian society and  . . .

Post-viva celebration pint (one of my outside commitments).

A shared planning document was opened up a few days before the event and a Twitter chat held the night before to make decisions about it. I participated in the former but not the latter due to outside commitments. While I do think that, in this case, the chat was necessary for finalizing the ground rules, my own inability to take part in it reflects one of the difficulties of massive international collaboration. With time zones and various schedules, anything done in real time will exclude someone. (The time zone issue came up during the composition of the novel as well but only to the extent that who was awake when helped determine who contributed at the start and who contributed at the end.)

The decision was made that the novel would be composed of vignettes, connected by the presence of Digi the Duck (whom I had earlier suggested as the protagonist) and by ending or beginning in an unspecified town square. Other characters, themes, and setting could be repeated, but this was entirely optional. In my own contributions, I was much more conscientious about connecting my vignettes to other people’s work early in the day; later, I was just trying to do what I could to reach the 50k goal (even though I should know better). Overall, the novel is pretty disjointed.

Pengu McHugh also made an appearance in the novel.

Another effect of choosing to build the novel from multiple vignettes was that a lot less collaboration took place on the paragraph or sentence level. There was a sense that each vignette belonged to its original author, unless said writer specifically authorized additions and revisions. While that is not necessarily wrong, I had a lot more fun when I was adding jokes about flappucinos and beakscotti to someone else’s mention of Starducks. The closer the collaboration, the more likely you are to create something greater than you could have made independently.

All that said, I think that if we had tried to write a novel using a more traditional kind of plot, we never would have gotten past 40k words.

If I were to take part in another collaboration like this, I would suggest encouraging people to add to other’s pieces directly from the beginning. I would also suggest keeping a list of characters and settings with brief descriptions, and maybe even a list of themes, to encourage closer interweaving of vignettes.

This kind of collaborative project could also be used in MOOCifying a creative writing classroom. I would most likely want to have my students create a planning document in class. Then, I would open a Google document and invite them to edit it (so that I could see who made which changes in the revision history); outside collaborators could join by following the link to edit (which I would encourage students to share over social media). I would most likely evaluate students’ participation as insufficient, sufficient, or outstanding and then give them more formal grades (if necessary) based on brief reflective essays about the process.

Fiction-writing, however, is not the only kind of writing for which such an assignment might work, as Tanya T. Sasser pointed out on Twitter: 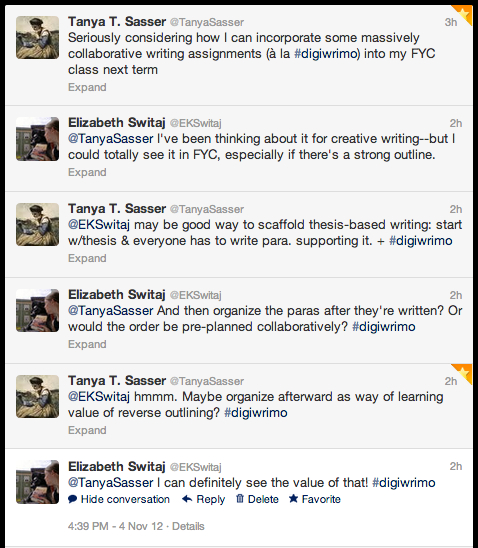 What about you? Do you think you might use this kind of collaboration as part of a course, or for any other purpose? If you participated, how do you think the choice to use vignettes affected your experience?

← Sunday Small Stone 37
Essay: Joyce, Berlitz, and the Teaching of English as a Foreign Language →

8 comments for “What I Learned from #DigiWriMo’s Novel Experiment”